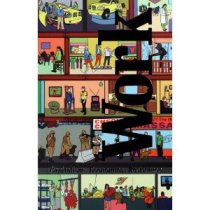 So, I recently finished a book called “Work” by a group that calls itself “Crimethinc.”  They fancy themselves an “ex-workers collective” and often refer to themselves as anarchists.  I will not be adding this book to the reading list page, because I cannot possibly recommend that anyone actually read it.

From time to time, I like to read books from the “other side” just to keep up with what they’re saying and be able to improve my argumentative skills.  This book offered no such opportunities.  It is about 200 pages worth of a bunch of (seemingly) unemployed (probably) 20-somethings complaining about how much they hate capitalism in general, and the concept of “work” in particular.  At first I was going to lump this book under the category of mindless communist propaganda, but it might even be worse than that.  You see, the Communists, deluded though they may be, actually offer an alternative.  They may have a terrible plan, but they at least have a plan for another system.

Crimethinc offers no such plan, just loads and loads of buzzwords.  They encourage you to engage in “meaningful social action” and to “build communities” and to “realize your full potential.”  Of course, if you receive payment for doing any of these things, well you’re just another capitalist shill.  Throughout the book they endorse theft (they believe that since capitalism is evil, employees are entitled to steal from their bosses) and rioting (despite the fact that it disturbs the “social order” they seem to love so much).

I was originally going to post a bunch of quotes from this book and refute them, but it really honestly isn’t even worth my time.  This “collective” gives anarchism a bad name.  They hate capitalism, but offer no solutions.  They admit that capitalism has dramatically improved the standard of living for people of all classes, but they do so reluctantly, and they seem to care more about “inequality” than human welfare.  They have an obsession with living in a “simpler” time that occasionally comes close to openly pining for the return of feudalism (because hey, at least everyone bought local, am I right?).  They glorify the past, hate the present, and have no plans for the future.

They are lazy bums.  I would tell them to get a job, but they probably can’t, because they’ve presumably been fired by their previous employers for stealing from them.

My name's Matt and I love Freedom.
View all posts by Dude Where's My Freedom? →
This entry was posted in Reviews and tagged anarchy, book reviews, Communism, crimethinc, propaganda, work. Bookmark the permalink.