You gotta hand it to Bernie Sanders – despite using the same old economic fallacies that progressives have been spouting since the 19th century, his campaign is resonating with people – as evidenced by the fact that around half my family has “liked” his Facebook page and continues to share posts where he seems to make a legitimate point, but in the end, is completely and totally wrong.  Below is one such example.

This graph is an image that he shared, along with the following caption:

“There is something profoundly wrong when we have a proliferation of millionaires and billionaires at the same time as we have the highest childhood poverty rate of any developed country on earth. This campaign is sending a message to the billionaire class: “you can’t have it all.” You can’t get huge tax breaks while children in this country go hungry.”

Now, he doesn’t say it directly, but the obvious logic he is invoking here is that tax breaks for “millionaires and billionaires” are contributing to child poverty.  Even if we assume the child poverty numbers are accurate (which I suspect is, itself, a dangerous assumption), there’s an obvious problem here though isn’t there?  The graph only provides half the data.  He’s making an allegation of a causal relationship between taxation of “the rich” and child poverty, but the data on taxation is mysteriously absent.

I’ve followed politics long enough to know what that means…  If the data helped support his point, he’d have provided it.  The reason he doesn’t is because it does not support his point whatsoever.  See the graph below, which I made myself using my amazing MBA skills in about 20 minutes. 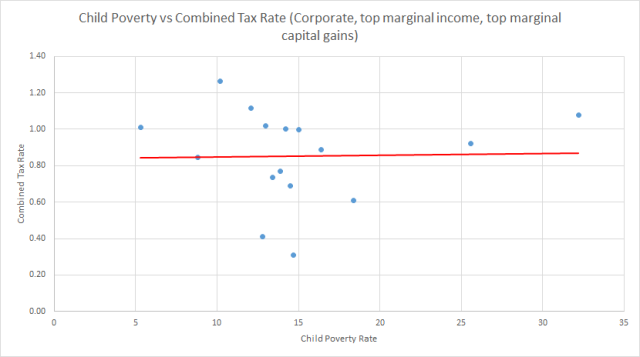 This is a scatter plot of the child poverty rate on the horizontal axis (provided by Bernie) and the combined taxation rate of “the rich” in the countries that Bernie’s image references on the vertical axis.  The U.S. is that one all the way out there on the right.  The red line is an excel-generated trendline representing the correlation between poverty and taxation.

I obtained the “combined tax rate” by combining the three forms of taxation must likely to impact the rich (and most often cited as the ones that need to be raised according to socialists like Bernie), the corporate tax rate, the top marginal income tax rate, and the top marginal capital gains tax rate.  My source for the corporate and income tax rate was Wikipedia, my source for the capital gains tax rate was the tax foundation.

Here’s a table of the data.  As you can see, the U.S. has the third highest combined tax rate of the 16 countries that Bernie provided as points of reference.  If you observe the graph and the trendline, it would seem that there is absolutely zero correlation between high tax rates on “the rich” and child poverty.  If you look reeeeeally closely, the trend line is actually slightly upward sloping, suggesting that higher tax rates lead to more child poverty, not less.

If the point of Bernie’s Facebook post was to suggest that we can improve the lives of children by adopting the taxation policies of other developed nations – then I fully agree.  Massive tax cuts on the top marginal rates would do wonders to get us more “in line” with the rest of the developed world.  Perhaps we could look to emulate Switzerland, for example, whose child poverty rate is 14.7, less than half that of the U.S.  They also happen to have the lowest combined tax rate of all the countries listed.  Their combined tax rate of 0.31 is less than one third of the U.S. rate of 1.08.

Qualification:  Obviously my method of calculating the figure I am referring to as “combined tax rate” is somewhat arbitrary and crude.  Obviously there are other forms of taxation besides the three I selected that are used in varying degrees and methods around the world.  I would defend my selection by pointing out that the three forms I selected are also far and away the most likely forms of taxation to be “progressive” in the sense that the rich are taxed at higher rates than the poor.  While it’s true that Europe, for example, often has high sales or VAT taxes, please keep in mind that the notion of substituting a progressive income tax for a flat-rate national sales tax has, to this point in America, been exclusively the domain of the farthest right portions of the Republican party.  I cannot imagine Bernie Sanders advocating such a position.  As I said above, these three forms of taxation are the exact forms of taxation that left-wing politicians in America regularly advocate need to be raised.  Note that in his Facebook post, Bernie is complaining about taxes for “millionaires and billionaires” exclusively, and not about the total tax burden on the average citizen.